“There’s a word in Tokelau—inati—that describes the value of sharing. I’ve seen that at the enhancement steering group. I really appreciate being part of it.”

Those words from Victoria University of Wellington student Ali Leota sum up the thinking behind the concept of the enhancement theme developed as part of the Academic Quality Agency’s (AQA) Cycle 6 Academic Audit. 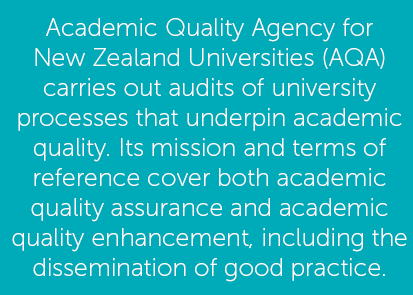 “It will address access, outcomes and opportunities for Māori students and for Pasifika students. It’s a topic of national significance and important to all universities, that all universities will work on in a common time period.”

Professor Robyn Longhurst, Waikato University, is Chair of the Enhancement Theme Steering Group. “It’s a big wide universe and we could have chosen anything as a theme,” she says. “In our cultural context, with the Treaty of Waitangi as a founding document and with the very strong relationships we have with the Pacific, it made sense to think more and work more together on the success of both Māori and Pasifika students.

“It’s been very difficult to make the sort of progress one would want to make in this area. The universities have offered some fabulous initiatives, but the structures haven’t been in place and we haven’t had the results. All the universities have done their own plans of what they want to put in place, as everyone’s context is different.

“Through the enhancement theme process, we will share good practice and examples of what is working or not working and—based on that sharing of information—each university will make its own decision about what they want to progress.”

Cycle 6 Academic Audit is an eight-year cycle, the first two to three years of which will involve work on enhancement theme initiatives and include recommendations for guideline statements that form the framework for the academic audit. The audit component of Cycle 6 (2021-2023) will audit universities’ progress against those statements.

“The enhancement theme will make it easier for those involved to identify colleagues, critique initiatives and share good practice,” says Prof Matear. “Universities will learn from one another and will also learn why initiatives work well in one university but may be different in another.”

The first Enhancement Theme Symposium for NZ universities was held in Wellington on 31 October, bringing together senior leaders, academics, professional staff who support both Māori and Pasifika students, quality managers and students to share and critique initiatives.

“This came at the end of the first year’s work on the theme,” says Prof Longhurst. “We had about 65 people there, from all eight universities. I really liked that it was a real mix of people…who often wouldn’t get that opportunity to all talk together.”

What impressed Ali Leota, who chaired the Symposium’s student panel, was that all the universities came together to work in one forum. “I really appreciated seeing universities working together on common causes and themes,” he says, “and to experience what universities hope to achieve for Māori learners and for Pasifika learners.”

His involvement came through the New Zealand University Students’ Association and the Memorandum of Understanding it has with AQA. “It’s the first time students have been part of the audit process,” he says. “I provide my personal perspective and have met with other university students to feed back to me about their universities in terms of support and recruitment.

“This is definitely a big step forward and has opened my eyes as to what’s going well and what’s not. It’s making universities accountable in terms of Māori issues and Pasifika issues; making sure our universities are doing what they say they’re doing.”

The symposium covered the three topics identified across the universities’ enhancement plans: access, student success and organisational change. Each topic was introduced with a plenary session, followed by structured workshop discussions. A final plenary session then looked at the summary of the day and considered ways forward.

Foundation studies and bridging programmes and the challenges they face with current policy settings were a key part of the discussion. While they are seen as valuable, the fees-free policy settings do not support them well, and universities are limited in what they can offer.

The importance of students staying connected to both university and whānau, and the need to improve information given to families and whānau to help them better understand university study and expectations were also discussed.

Ensuring that students are involved in making decisions that affect them was an important point raised in the session, as was the idea of student success. The wider view of this included students graduating happy, thriving, having enjoyed their experience and leaving university with a good sense of who they are. Cultural understanding and competency of non-Māori and non-Pasifika staff was also seen as important.

Many current initiatives were identified and shared, with the caution that there was a need to look at what really works. In response to the question ‘what needs to improve’, workshop comments included:

The final plenary session agreed there was a need for all-of-university collective responsibility and rejection of ‘deficit thinking’ to improve opportunities and success of both Māori and Pasifika students.

The full symposium report will be available for all participants to share. “We will share this with our internal steering group at Waikato, take on board what’s come out of it, and consider our own initiatives,” says Prof Longhurst.

“One of the things for us is how to make better use of student data to wrap services around particular groups of learners. This project around learner analytics will be a particular piece of work during the enhancement theme. After the initial three years, when we go into the regular cycle of audit, we will have put in place some measures on this that will become part of the regular process of the audit cycle.”

“The work now is to continue working at each university’s own plans, and to publicise the enhancement theme more, increasing the visibility of the work.

“This symposium was a great time for celebrating the positive things that are working. It was eye-opening to be there and experience what universities hope to achieve for both Māori and Pasifika learners, and to feel that students are being valued. It was good to leave competitiveness at the door and see our students succeed.”

An introductory video has been produced, outling the background to and aims of the Enhancement Theme.

For more details on the Cycle 6 enhancement theme, check out the AQA website.