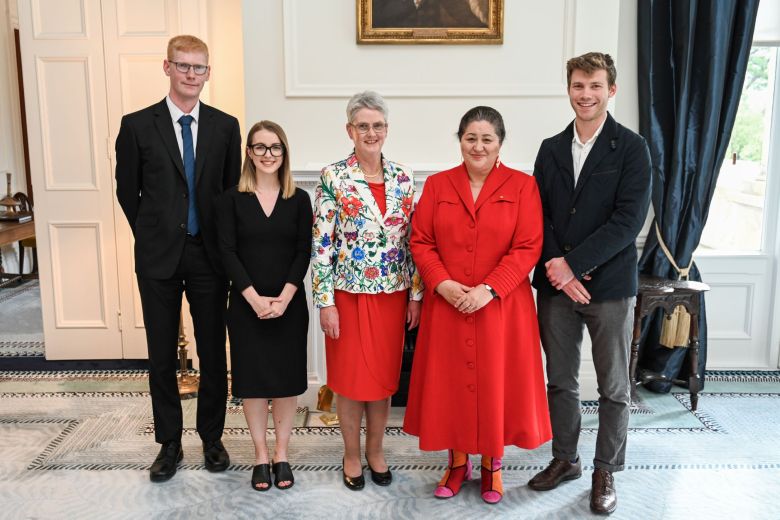 The Rhodes Scholarship’s long history of identifying and developing future leaders in their fields continues with New Zealand’s 2022 recipients set to leave their mark on human rights, climate action and healthcare.

The Rhodes Scholarship is the world’s preeminent and oldest graduate fellowship, based at the University of Oxford in the United Kingdom since 1903.

The selection process, which in New Zealand is chaired by Governor-General Her Excellency The Rt Hon Dame Cindy Kiro, seeks young people with proven academic excellence who also show exceptional character, leadership, energy to use their talents to the full and commitment to solving humanity’s challenges.

The Rhodes Trust is proud of the diversity of its Scholars in terms of background, academic focus, interest, involvement in local community, religion, race, gender identity and the more than 60 territories on five continents from which they are selected.

Maisy Bentley, aged 23 and from Whitby near Porirua, is described by one of her referees as “a future changemaker” and will be studying for a Master of Philosophy in Socio-Legal Research at Oxford’s pioneering centre for the subject.

Maisy’s master’s will enable her “to build on the academic success I am most proud of by producing self-directed research at the forefront of legal thinking and highly relevant to everyday society”, she says.

“In the future, I hope to be a bridge between victims of human rights abuses and the most powerful international courts, representing them and helping them seek justice.”

Maisy is an intern in Canberra for the Multi Country Office (Australia, New Zealand and the Pacific) of the United Nations High Commissioner for Refugees, ahead of starting a job with law firm Chapman Tripp in Wellington in 2023.

She completed a conjoint Bachelor of Laws with First-Class Honours and Bachelor of Arts with a Major in Development Studies and Minor in Māori Studies at Te Herenga Waka – Victoria University of Wellington earlier this year.

Her previous scholarships and awards for academic excellence and leadership include being the World Federation of United Nations Associations’ 2021 Young Leader of the Year. This year she was a member of the New Zealand Government’s delegation to the United Nations’ Commission on the Status of Women and in 2019 she was a civil society delegate to the Commission. In 2020 she was a member of the Asia-Pacific Economic Cooperation Voices of the Future delegation.

Maisy’s volunteering has included being a national board intern and then board member for the YWCA (2020–2022) and contributing to the Wellington Community Justice Project.

While at Te Herenga Waka, her publications included the forthcoming ‘The Advertising Standards Authority and the self-regulation of misleading political advertising on social media: the need for a stricter approach to protect New Zealand’s democracy’ in the Public Interest Law Journal of New Zealand and ‘The Missing SDG – youth’ in The People’s Report on the 2030 Agenda and Sustainable Development Goals (2019).

Elliott Hughes, aged 22 and from Christchurch, will be studying for a Doctor of Philosophy in Mathematics.

At Canterbury, his awards and scholarships have included a Senior Scholarship for the top students in his year across the university continuing to postgraduate study, and three Mathematics and Statistics Scholarships.

Elliott is looking forward to studying at Oxford “because I believe mathematics offers a powerful suite of tools for understanding the world. Further education at Oxford will equip me with the knowledge I need to use these tools to tackle some of the hardest problems facing society. Beyond my academic goals, the Rhodes Scholarship appeals to me because it will enable me to meet people from diverse backgrounds who share my passion to improve the world”.

Elliott is particularly focused on “the urgent need to find the right combination of political will, economic investment and technological development to halt climate change and eliminate our reliance on fossil fuels”.

His concern for the environment is also reflected in his master’s thesis, which is creating and investigating mathematical models for wilding pines, the conifers whose advancing fronts are a significant problem in New Zealand’s high country.

Elliott’s volunteering has included drafting policy and acting as a spokesperson for Generation Zero, the youth-led organisation advocating for a low-emissions New Zealand. He also plays important roles in Riccarton Community Church and the 1st Christchurch Boys’ Brigade Company.

Elliott’s past research activities include helping Te Pūnaha Matatini, the Centre of Research Excellence for complex systems, in modelling for the Covid-19 work that won it the 2020 Prime Minister’s Science Prize.

Oliver is in his final year of a Bachelor of Medicine and Bachelor of Surgery at the University of Otago having previously completed a concurrent Bachelor of Arts, majoring in philosophy.

The breadth and combined workload of Oliver’s undergraduate studies is praised by his referees, one of whom describes him as “a future leader of healthcare”. They speak of his honesty, compassion, open-mindedness and enthusiasm, commenting that: “While he has a strong rational and scientifically focused mind, he also has a broad social perspective fused with strong values of equity, democracy and transparency.”

Oliver says his Oxford studies will be “the natural union of my analytical philosophy and clinical medicine halves”, adding that: “As privileged as I feel to be the recipient of such a prestigious scholarship, I believe that Oxford is not a destination but part of a journey – one my scholarship will undoubtedly foster, but which nonetheless leads me back to the country I love, its people and the vulnerable members of our hapori whānui”.

He has a strong track record in policy research, including as lead researcher on novel democratic methods for alcohol policy reform, for which he authored a 100,000-word monograph and a journal article under review. He is currently lead researcher on a project that looks into predictors of intensive care unit admission in overdose patients.

Alongside his studies, Oliver plays football, futsal and classical piano. In his spare time, he enjoys tramping and freediving throughout the South Island.

Offering her warmest congratulations to New Zealand’s 2022 Rhodes Scholars, Dame Cindy says: “Maisy, Elliott and Oliver’s selection is not only testament to their outstanding academic careers so far, but also to their clear commitment to using their talents for the good of others. I have no doubt they will each go on to achieve remarkable things and help to make Aotearoa New Zealand a better place for future generations.”

Read more about the Rhodes Scholarship.

In New Zealand, the application and selection process is administered by Universities New Zealand – Te Pokai Tara along with more than 35 other scholarships and fellowships.

Applications for 2024 close on 1 August 2023. More information is available on the scholarship’s page on the Universities New Zealand website.

A list of New Zealand Rhodes Scholars from 1904 is available here.