The recipient of the 58th Girdlers’ Scholarship to attend Corpus Christi College at the University of Cambridge in the United Kingdom wants, on completing his studies, to serve Aotearoa New Zealand and the wider Pacific region in advancing themselves globally. 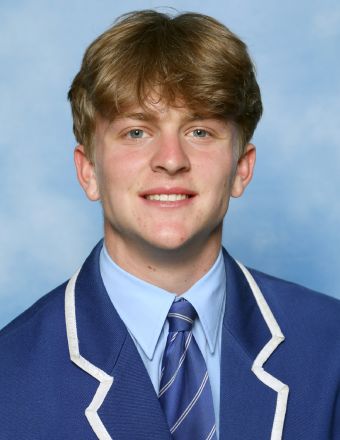 Alex Ramsay, aged 18, who attended St Patrick’s College and before that Onslow College in Wellington, will study Human, Social and Political Sciences, a cross-disciplinary undergraduate degree unique to Cambridge.

He intends to complete a master’s and doctorate in political science, political philosophy, development studies and/or international relations after his undergraduate degree.

“By studying comprehensively in this field, my knowledge and skills will be those required to make a lasting impact in society,” says Alex.

“I hope to work in government linking New Zealand with global networks. I want to be someone who participates in meetings of national, regional and international significance, providing policy advice and assistance on economic and social development based on what I have learned throughout my education and experience.

“An ambition I hope to act on in my career is to incorporate New Zealand's Pacific neighbours into global discourse, where they are often underrepresented, so key priorities can be addressed in New Zealand and the wider Pacific and the region can collectively advance itself on the global stage.

Alex’s St Patrick’s College referees describe him as having thrown himself into the life of the college after joining in 2020 and contributing across a range of areas, including sport, music and debating, for which he was the college team’s leading speaker.

He is, they say, an eloquent communicator – both verbally and in creative and other forms of writing (including poetry).

After just a year at the college, Alex was one of its designated Manu Taupua (leaders), having at the end of 2020 been awarded the Tupa’i Scholarship for best all-round student in Year 12.

Last year, he was Proxime Accessit to the college’s Dux and awarded the Brian O'Halloran Cup for best all-round contribution to the life of the college. He also received awards for house leadership, public speaking and coming first in economics, mathematics with statistics, biology, classical studies and religious education.

In sport, he captained the college’s Senior A basketball team in 2021 and won the trophy for most valuable player in 2020. He was selected for the Wellington under-19 representative basketball squad in 2021 and had a trial for the Saints professional basketball team. His other sports are athletics and karate.

As well as playing guitar in the college jazz and chapel bands, Alex has his own trio, which has recorded a single available on Spotify. He is an avid busker and has also played to raise awareness and money for Cystic Fibrosis NZ.

Administered by Universities New Zealand – Te Pōkai Tara, Alex’s scholarship is funded by The Worshipful Company of Girdlers, which traces its foundation back to medieval times as a craftsmen’s guild. It awards a scholarship every three years to an outstanding New Zealand school student to undertake a degree at Corpus Christi College.

Valued at circa £45,000 a year, the scholarship contributes to Alex’s university and college fees, as well as living costs while studying.

In announcing the decision on behalf of The Worshipful Company of Girdlers, the Master, Major-General Sir Sebastian Roberts KCVO OBE, said: “The Company is delighted to confirm the award of this year’s Girdlers’ Scholarship to Alex Ramsay. He has clear academic ability and the rounded personality to embrace more than just the studies while at Cambridge.

“Alex joins an ever-growing alumni of distinguished Girdlers’ Scholars of which the Company is justly proud; many have gone on to do extraordinary things in their lives, including through contributions to public service and philanthropy.

“We will look forward to welcoming Alex to the UK and the Company later in the year, watch his progress with interest, and support him during his time at Cambridge.”

Professor Duncan McGillivray, Chair of the Girdlers’ Scholarship Selection Committee, added: “The committee was impressed by Alex’s broad range of commitments and interests and his clear passion and enthusiasm for making a difference. We believe he will flourish in Cambridge.”

Discover more about the Girdlers’ Scholarship on its Universities New Zealand web page.