How does NZ’s research stack up?

A recent report highlighted the strong performance of UK researchers in terms of research articles, downloads and citations, relative to global population and R&D expenditure. So, we wondered, what might this picture look like for New Zealand?

The UK analysis comes from the Higher Education Policy Institute (HEPI) report  “How much is too much? Cross-subsidies from teaching to research in British universities”.

The author found that with only 0.9% of the global population, the UK was producing 6.3% of research articles and 15.2% of the world’s most highly-cited articles. 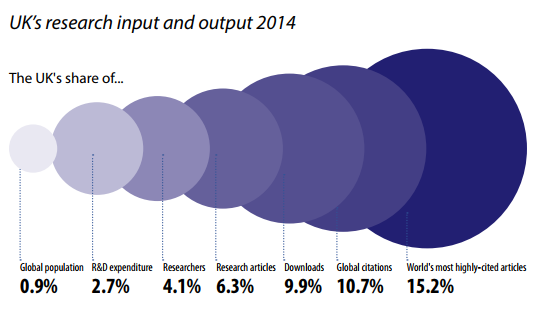 Source: “How much is too much? Cross-subsidies from teaching to research in British universities”, Vicky Olive, Higher Education Policy Institute, 2017.

Let's compare this with New Zealand.

As with the UK, our initial analysis would suggest that New Zealand researchers well outperform our small size in terms of global population and R&D spend. We estimate that with only 0.06% of the global population, our researchers generate around 0.7% of research articles and as much as 1.4% of the world’s most highly-cited articles. 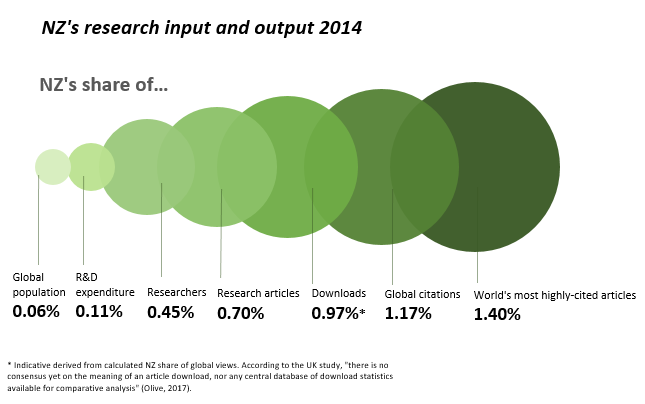 This chart suggests that New Zealand researchers stack up against the world's best and is arguably a better indicator of innovative capacity than more narrow output measures, such as patents.

And with our R&D investment (as a proportion of GDP) around 30% below that of the UK, there is the potential for even greater returns to be achieved.

In this context, we welcome the new Government’s objective to increase NZ's R&D spend to 2% of GDP over the next ten years. While tax credits have a role to play and will be of benefit to some parts of the research community, a mix of incentives is important and direct investment in research should remain the prime mechanism for growing R&D in New Zealand. New Zealand university researchers are well-regarded, with around 87% of the 2017 Marsden Fund awards having university staff as principal investigators.

The report also highlights the new finding that “each international student contributes (on average) £8,000 to British research” and the projection that “unless research funding increases, the UK’s regional capacity will suffer badly”.