It's not all about the money

Higher salaries and better earning potential are not the key benefits of a university education, according to students and graduates polled in a recent Universities UK (UUK) survey. They see universities as providing a broad range of benefits, so focusing mainly on earnings potential to define the value of university degrees could be a disservice to students and recent graduates. 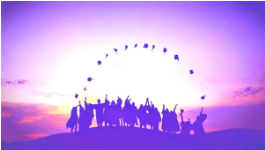 “University students and graduates recognise value in the range of benefits gained from attending university, including building independence and confidence, exposure to new experiences, and enjoyment of learning,” says Nicola Marsh, from ComRes who carried out the research on behalf of UUK.

“Future earning potential is among the benefits considered by students and graduates, but it is not the most important. Quality of life—for example, work/life balance—is the top priority when considering what they look for in a career, suggesting that they take a more holistic approach to their careers.”

A broad range of reasons played a part in making the decision to go to university: interest in the chosen degree subject (56%); enjoying studying and learning (48%); and as a first step in building a career (50%).

Future earnings is not the top motivation for choosing a career either, with those surveyed citing work-life balance as their top consideration (53%), with the chance to take on a variety of interesting work (39%) coming a close third to earning potential and financial benefits (42%).

The poll also reveals the following skills, facilities and other assets which students benefit from at university, including:

Overall, students and recent graduates are positive about the benefits of university for themselves, others and wider society; 84% would recommend university to others as a worthwhile experience. 86% said university had given them the opportunity to think about what they want to achieve in the future and the same proportion said that university had helped them learn to be independent.

Chris Whelan, Chief Executive of Universities New Zealand thinks a survey of this sort in New Zealand would probably tell a similar story.

“We know that government keeps pushing employment rates and earnings when trying to communicate the value of education to students considering their post-school choices. From a Universities NZ survey of 1000 parents of school age children in 2017, we know that those parents actually rate earning potential below their sons and daughters doing something they like and ending up in jobs that they will actually enjoy.

“We also know that a large proportion of the student population choose subjects based on what they are passionate about and what they think will provide a pathway to fulfilling, satisfying lives and careers.

“There is always going to be a tension between what government and industry want, and what individual students want.

“We need to understand this and incorporate it into the advice and support that we put around prospective students as they weigh up their options.”

ComRes, an independent polling and research agency and is a member of the British Polling Council, interviewed 2,280 people online between 20 August and 2 September 2019: 767 undergraduate students and 1,513 people who graduated in the last 5-10 years.