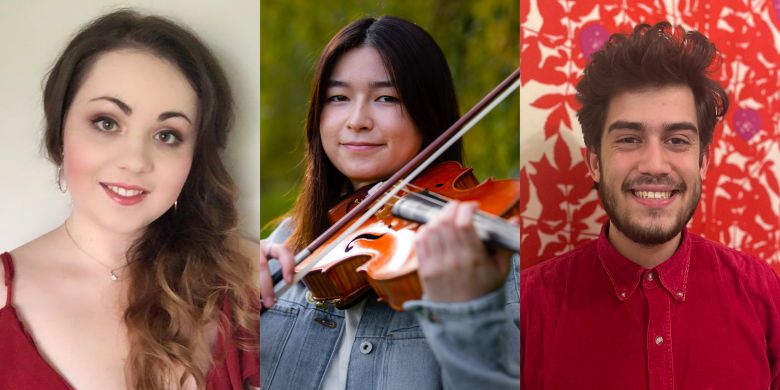 Larissa Kent (pictured left), aged 25, is a lyric soprano who wants to undertake a Master of Music in Voice Performance at a United Kingdom or United States conservatorium.

“Music continues to enrich my life and I have such a passion for this art form that I wish to pursue it to the highest possible level,” says Larissa.

Her competition successes include receiving third place in the Becroft Aria Competition in 2021. She has performed around New Zealand as a soloist in concerts with piano and orchestra, as well as being involved in many choirs and ensembles.

Violist Cecile McNeill (pictured centre), aged 21, aims to travel to the US for an audition tour with the goal of pursuing a Master of Music.

She has previously auditioned for and been accepted by the Juilliard School in New York, the Cleveland Institute of Music, the New England Conservatory of Music in Boston and the University of Southern California Thornton School of Music in Los Angeles.

“But despite receiving various scholarships for financial aid, the cost of attending any of these schools was overwhelming and I made the extremely difficult decision not to do so,” says Cecile.

She now hopes to audition again – first electronically and if successful in person.

"As someone who is aiming towards a career in music, I believe continuing my education will give me the tools to achieve this career, as with more knowledge comes a greater ability to be an empathetic and successful musician,” says Cecile.

While studying for a master’s, Cecile plans to work on developing her personal musical identity as well as perform with different orchestras, ensembles and musicians.

Cecile has played with the Auckland Philharmonia Orchestra and the New Zealand Symphony Orchestra’s National Youth Orchestra. She has taken part in the New Zealand String Quartet’s Adam Summer School for Chamber Music since 2019.

David Paligora (pictured right), aged 23, is auditioning electronically for the New England Conservatory of Music in Boston, the Manhattan School of Music and the Northwestern Bienen School of Music in Illinois, followed by in-person auditions if he is successful.

All three institutions provide unique approaches to David’s area of interest, the rich history and culture of brass playing.

“I plan to study the bass trombone’s unique relationship with sanctity, power, domination and masculinity in the western musical canon,” he says.

The New Zealand Symphony Orchestra invited him to be a guest principal player in 2020 and he is now a casual musician with the orchestra. He has been principal bass trombone in its National Youth Orchestra since 2018. Adding to his professional experience are performances with the Auckland Philharmonia Orchestra, Orchestra Wellington and the Royal New Zealand Navy Band.

The Judith Clark Memorial Fund was set up in Judith’s name after her death in 2014, in recognition of her gratitude for the scholarships she received as a young student enabling her to further her studies as a pianist overseas.

The fund is managed by the Nikau Foundation and the Judith Clark Memorial Fellowship is administered by Universities New Zealand – Te Pōkai Tara along with more than 35 other fellowships and scholarships.

Further details are on the scholarship’s page on the Universities New Zealand website.