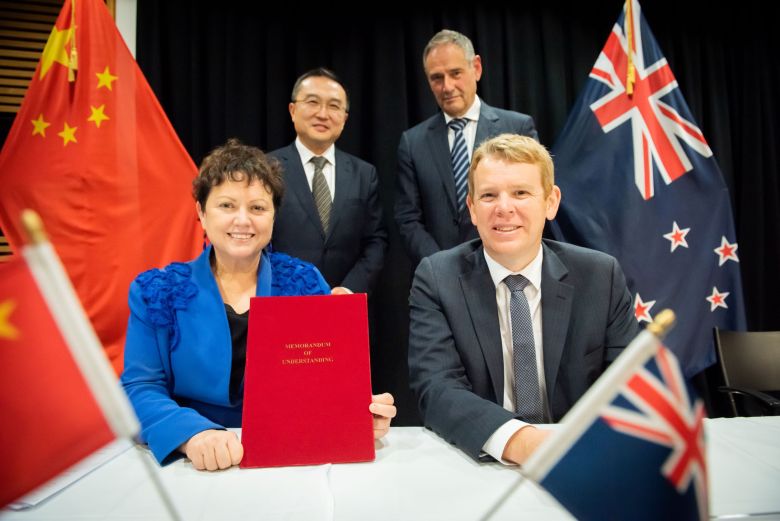 Fifteen years of successful international education collaboration through the New Zealand Centre at Peking University have been celebrated with the renewed signing of the Memorandum of Understanding between the prestigious Chinese university and all eight New Zealand universities.

Many former New Zealand ambassadors to China and China experts from across New Zealand’s universities were among guests at the ceremony.

Established in 2007, the New Zealand Centre promotes the study of New Zealand in China and China in New Zealand and contributes to strengthening ties between the countries by promoting mutual understanding and co-operation across diverse fields of academic and other sector engagement.

It is supported by the Ministry of Foreign Affairs and Trade Manatū Aorere and Education New Zealand Manapou ki te Ao, the government agency for building international education.

The Centre was initially a partnership with Waipapa Taumata Rau, University of Auckland, with the other seven New Zealand universities all joining by 2014 and the first Memorandum of Understanding signed in 2016.

“It is a measure of the important role the New Zealand Centre plays, and the esteem in which Peking University is held, that this renewed Memorandum of Understanding signing and previous such occasions have been high-profile events involving government ministers from both countries,” says Universities New Zealand’s Professor Thomas.

“The Centre was opened by Minister of Foreign Affairs and Trade Winston Peters and the first Memorandum of Understanding signing was at a ceremony in the Great Hall of the People in Beijing, witnessed by Chinese Premier Li Keqiang and Prime Minister John Key.

“Both individually and collectively, New Zealand universities have many international partnerships such as this that enable teaching and research opportunities to enhance New Zealand’s relations with other countries.”

“More than 200 Chinese students have visited New Zealand to study through the Centre and around the same number of New Zealand students have travelled in the other direction. The Centre has hosted some 50 academic fellows from New Zealand’s universities across disciplines ranging from history, religion and literature to political science, law and marketing to mathematics, medicine and environmental sciences. Peking University academics have paid reciprocal visits.

“There have been other visits and guest lectures too and the Centre’s events programme has been extensive, including, for example, a Writers Week featuring leading figures such as Elizabeth Knox, Sarah Laing and Ant Sang.

“The Centre has gone from strength to strength during its first 15 years and with this renewed Memorandum of Understanding we look forward to it continuing to do so.”