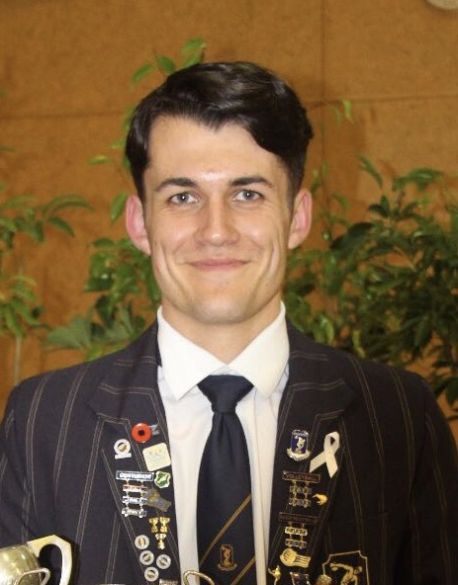 Eighteen-year-old Quaid plans to study Human, Social and Political Sciences at Cambridge, combining his interests in both politics and international studies, and social and biological anthropology.

Quaid’s academic achievements include achieving Outstanding Scholarship in Biology as a year 12 student alongside Scholarship in Geography, English and Biology last year. In Year 13, Quaid also undertook university papers (through University of Waikato) in Chemistry, Biology, Legal Studies and Calculus, receiving A+ grades in both Biology and Legal Studies. Sport also played an important part in his school life. Quaid was Tauranga Boys’ College Sports’ Captain last year and captained the Senior A Volleyball team who placed first at the National Secondary School Championships. He was also a New Zealand Under 21 beach volleyball representative and was named in the NZ Under 20 development team for indoor volleyball.

Last year Quaid received three major awards from his school, including the ‘Pergo et Perago’ Award for a student that exemplifies the school motto ‘Pergo et Perago’ by showing a commitment to achieving the philosophical traits of ‘better than before’ through dedication to academic pursuits, achievement in sports, personal development, and all other facets of school life. His contribution to the wider life at school, as well as his academic excellence, won him the school’s Monte Ohio Trophy for top Māori student, and finally a Principal’s Scholarship to help him with costs associated with his plans following school.

Though he remains uncertain on what his future will hold following his education, service is high on Quaid’s list of priorities for his future plans—particularly his local Tauranga community. “I want to return home at some point to assist in the development of my community, which has played a significant part in affording me the opportunities I have received,” he says.

Quaid feels he may do this in a multitude of different ways, whether through working for the local Tauranga City Council—where he is currently employed—getting involved in politics at a local or national level or joining the public service. “Each of these individual paths is different, but they have one thing in common: they each allow me to apply everything I will have learnt and provide tangible benefit to New Zealand. At the end of the day, this is what I feel is of utmost importance.”

Apart from his career plans, Quaid wants to continue playing volleyball, and he hopes to continue to experience international competition as a member of the Under 21 beach volleyball Team, or even the Open team in the future. Furthermore, Quaid is a Volleyball New Zealand regional referee, and national referee candidate; he is looking to gain his national qualification to both gain experience and give back to his sporting community.

Quaid is currently enrolled in the University of Auckland where he is a recipient of the Top Achiever Scholarship. He is studying a Law and Global Studies conjoint, majoring in Global Politics and Human Rights, and Māori. His studies in Māori also extend beyond his current degree, as it is a language—alongside New Zealand Sign Language—in which he is working to become fluent within the next few years.

The late Sir Douglas Myers set up this scholarship 18 years ago for academically gifted students intending to return to New Zealand to become leaders in their chosen fields.

John Taylor, Chair of the Myers Scholarship Selection Committee, says “Douglas would have been delighted with Quaid's selection. He was always very keen to support top achieving young Māori role models, so would have been very moved indeed to see Quaid become the first Māori student to win the Myers Scholarship. He will have so much to give to, and to gain from, his Cambridge education, to the ultimate benefit of his Tauranga community—and beyond.”

Sir Douglas, a well-known businessman and former leader in the brewing industry, graduated with a BA in History from Gonville and Caius College. He was a significant supporter of education, business, sport and the arts, and this scholarship continues his outstanding legacy of finding ways to create opportunities to encourage young New Zealanders to succeed in global competition.

The scholarship provides tuition and college fees and a living allowance and is worth approximately £34,000 or NZ$60,000 per annum.

Universities New Zealand, formerly the New Zealand Vice-Chancellors’ Committee, administers this scholarship in addition to around 40 other undergraduate and postgraduate scholarships.

Applications for the 2020 Sir Douglas Myers Scholarship close on 1 December 2020.