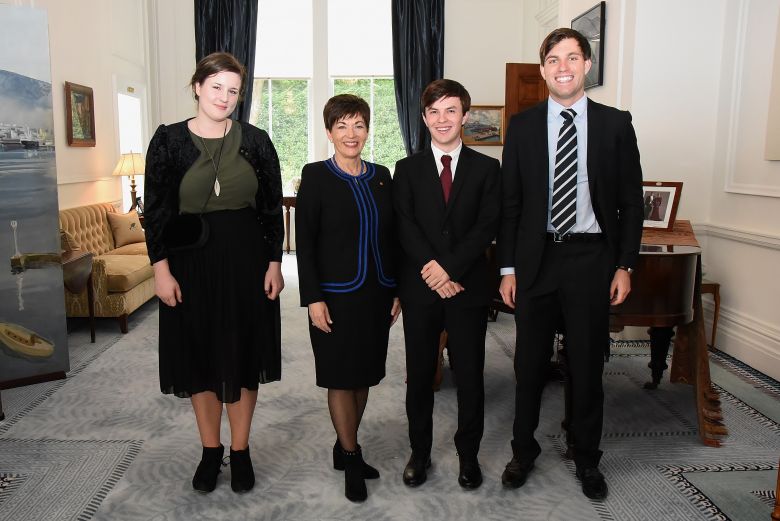 Prestigious Rhodes Scholarships have been awarded to three outstanding young New Zealanders to carry out post-graduate study at the University of Oxford (UK).

In announcing the awards, the Governor-General Her Excellency The Rt Hon Dame Patsy Reddy congratulated the eight shortlisted candidates and said the Selection Panel faced a tough decision to choose three scholars from New Zealand.

“My warmest congratulations to our 2018 Rhodes scholars. Through the Rhodes scholarship you have the opportunity, as well as the character, academic ability, and passion, to make a real contribution to New Zealand and the rest of the world, in your chosen field. I will follow your progress with great pride and interest.”

The Rhodes Scholarship provides transformative opportunities for exceptional all-round students to carry out postgraduate study at the University of Oxford. Today, 95 scholars are selected from 64 countries and go on to become part of the wider Rhodes Scholarship community while at university, and throughout their lives.

Rhodes had a keen understanding of the importance of tertiary education. His vision in founding the Scholarship was to develop outstanding leaders who would be motivated to “fight the world's fight”, “esteem the performance of public duties as their highest aim”, and promote international understanding and peace.

Jean Balchin, aged 23, studied at Waihi College, and is completing a Bachelor of Arts Honours in English Literature at the University of Otago.

A former teacher described her as the finest, most rewarding and highest achieving student in 28 years of teaching. The Otago Selection Panel said they could not have been more impressed by her potential to make a difference through her combination of her intellect, character and life story.

Jean’s passion is science communications. As an intern with the Science Media Centre, the country’s independent source of information for the media on all issues related to science, she wrote A History of NZ Science in 25 objects.

In addition, Jean is an accomplished pianist, exhibited artist, a performer and has a green belt in Judo. She is also an active volunteer with the Life Matters Suicide Prevention Trust and contributed to the Break the Silence series on youth suicide run by the New Zealand Herald earlier this year.

At Oxford she proposes to study a Doctor of Philosophy (DPhil) examining Social Darwinism. She says his theory of competition has been perverted to explain and justify status inequalities between different ethnic groups. She proposes a future career in education or academia.

Jamie Beaton, aged 22, studied at King’s College in Auckland and graduated from Harvard University in three years with a double degree in Applied Math and Economics as well as a Master of Science in Applied Math, while maintaining an “A” average.

Best known as an entrepreneur, while a undergraduate Jamie founded Crimson Education, which provides international and domestic university admissions consulting, tutoring and career mentorship and is now the largest personalised education company in the Southern Hemisphere.

While at Crimson, Jamie has observed the powerful disruptive impact of technology including digitisation, artificial intelligence and automation and how it is reshaping industry. This has influenced his decision to pursue a Master of Philosophy/Doctor of Philosophy (MPhil/DPhil) in economics at Oxford, focusing on the impact of automation on labour markets. In particular, he wants to “leverage Oxford’s global leadership in the impact of technology on the working world from the Oxford Martin Programme and economics faculty”.

Jamie proposes to use his Oxford education, Rhodes alumni network and entrepreneurial skills to achieve impact as a leader in a new world of personalised education.

Marco de Jong, aged 22, studied at Auckland Grammar, before completing a Bachelor of Arts (Honours) and is currently completing a Master of Arts at the University of Auckland.

Marco’s Samoan ancestry has helped him find a passion for the Pacific. He is currently learning gagana Sāmoa. With others, he formed and energised the University’s History Society, and is the outgoing President. Through the school’s outreach programme they have visited over 50 schools, engaged with low decile schools and encouraged Pacific students to study Pacific history. He is also a Tuākana, mentoring all undergraduate Māori and Pacific history students, which has made a huge difference for dozens of students.

His referees also noted his exceptional ability, energy, leadership skills and commitment to his community.

At Oxford, Marco proposes to study a Doctor of Philosophy (DPhil) under New Zealand historian and fellow Rhodes Scholar, James Belich. He proposes to focus on climate change diplomacy and wants to become a force for the Pacific people through either education, academia or diplomacy, to ensure decisions are made with, and not for, islanders.

Today the Rhodes Scholarships for New Zealand is a partnership between the Rhodes Trust and the Robertson Foundation. The application and selection process is managed by Universities New Zealand (formally known as the New Zealand Vice-Chancellors’ Committee), which also manages around 40 other scholarships worth over $2Million.