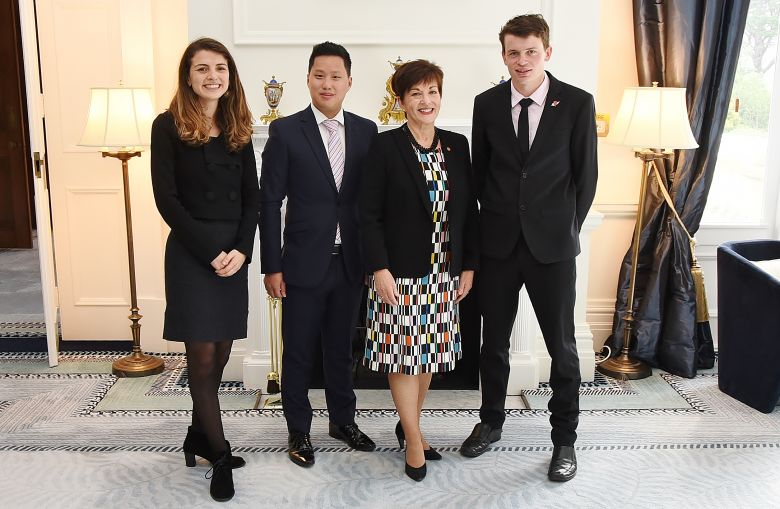 “New Zealand’s Rhodes Scholars represent the best and the brightest of this country’s young people,” said the Governor-General Her Excellency The Rt Hon Dame Patsy Reddy when announcing the awards. She noted the Selection Panel faced a tough decision in choosing the three scholars from New Zealand.

“I was impressed once again by the intelligence and poise of this year’s candidates during the interview process and their obvious enthusiasm for their areas of study. I wish the recipients all the best for their studies at Oxford.”

Johann attended St Patrick’s College, Silverstream, before starting a Health Sciences degree at the University of Auckland. “Soon, I discovered my passion lay in the philosophical and socio-political aspects behind the great issues of the day, particularly in social justice and health,” he says.

Achieving 15 First in Course Awards during his time at Auckland was not his only achievement. Johann volunteered over 16,000 hours across 10 years with St John Ambulance, founding and working with the Silverstream Elderly Outreach Group and Academic Tutoring Programme, and receiving several prestigious community service awards for his volunteer work, including the Minister of Health runner-up Youth Volunteer of the Year Award, the St John Grand Prior’s Award, and a Mayoral Commendation Award.

Johann says his overarching motivation in life is to advance the human condition socially, politically and ethically. “To do this, I am a firm believer in combining the principles of analytic philosophy and political theory with basic human compassion.”

He plans to study for a Master of Philosophy in Political Theory at Oxford’s Department of Politics and International Relations, a programme that combines philosophy with politics and political theory. “This especially appeals to me, as I am passionate about using theory to inform practice and making political philosophy relevant to the wider populace.”

He is passionate about increasing diversity in the humanities and at Worcester College has already been the student body’s Equal Opportunities Representative and LGBT+ Officer, helped with access schemes around Worcester, been a volunteer tutor with Schools Plus, an outreach organisation for disadvantaged communities, and continued his work with St John Ambulance.

“I hope to one day contribute something significant to how we do political philosophy and orient it towards advancing our great challenges; not just for ‘us’ or ‘ourselves’, but for everyone.”

Mattea Mrkusic completed her secondary schooling at Takapuna Grammar, then moved to the University of Melbourne, where, after one year, she was accepted as a transfer student to Harvard University where she completed a Bachelor of Arts (Honors) in Environmental Studies and Human Rights. In 2017, Mattea won Harvard’s prestigious thesis prize, the 2017 Thomas T. Hoopes Prize, for outstanding scholarly work and research for her thesis: Collapse the Distance: Climate Change Migration and Frontline Storytelling in the Republic of Kiribati.

Mattea’s family background—her mother, a journalist, interviewing asylum seeker detainees in Australia, and father, a keen tramper—helped set her on her course as an environmentalist, passionate about human rights.

“If you were to ask me for my personal lodestar, what binds me to my work, it would be this: render systemic violence visible to the public, and empower communities to become stewards of human rights,” she says. “As a scholar, investigative reporter, grassroots organiser, policy wonk, and founder of a national climate migration project, I’ve fought my damnedest to do this.”

Mattea’s Harvard supervisor described her thesis as ‘a masterpiece’: in-depth research on climate-related displacement in Kiribati, creatively presented in podcasts, photographic exhibition and an academic essay. While at Harvard, Mattea founded Collapse the Distance, a non-profit organisation that aims to educate citizens of high-emitting countries about climate migration and developed her thesis into an exhibit that has toured the US and will next year collaborate with Pacific Climate Warriors, touring libraries and schools across Aotearoa and Australia.

While in the US, Mattea has also been working with Refugees International, an independent, non-profit organisation that conducts research and advocacy to improve assistance and protection for refugees and internally displaced persons, and writer for the UN Development Program.

At Oxford, Mattea plans to undertake an MSc in Refugee and Forced Migration Studies, to be followed by a Master of Public Policy, and then to work for the UN Platform on Disaster Displacement, returning to Aotearoa to co-design internationally respected climate displacement policy.

A graduate of Lincoln University, James Ranstead plans to study for an MPhil in International Relations at Oxford, specialising in environmental justice and political ecology, with an emphasis on climate change policy.

James maintained an exceptional academic performance throughout his undergraduate degree, majoring in conservation and ecology, while taking on positions of leadership within and outside the university community, culminating in his election as President of Lincoln University Students' Association for 2018. His academic ability is demonstrated by the numerous academic awards and scholarships he has received, alongside his considerable achievements in sport and community work.

James has put into practice his passion for the environment, working as a park ranger and parks volunteer in Auckland, along with extensive volunteering, including as an Environmental Limits’ Task Member with Environment Canterbury, and an Environmental Education Guest Speaker at Lincoln High School.

James hopes to use his interdisciplinary background in physical and social sciences to work at the International Panel for Climate Change, with his eventual ambition being to return to New Zealand as the Parliamentary Commissioner for the Environment. “Leadership positions excite me as they allow me to draw on my history and speak for those that need it, and I hope to use my future positions to break the barriers of injustice that some face.”

The Rhodes Scholarship provides transformative opportunities for exceptional all-round students to carry out postgraduate study at the University of Oxford. Today, 95 scholars are selected from 64 countries and go on to become part of the wider Rhodes scholarship community while at university and throughout their lives.

Sir Cecil Rhodes had a keen understanding of the importance of tertiary education.  His vision in founding the Scholarship was to develop outstanding leaders who would be motivated to “fight the world's fight”, “esteem the performance of public duties as their highest aim” and promote international understanding and peace.

Today the Rhodes Scholarships for New Zealand is a partnership between the Rhodes Trust and the Robertson Foundation, with the application and selection process managed by Universities New Zealand long with about 40 other scholarships worth over $2 million.