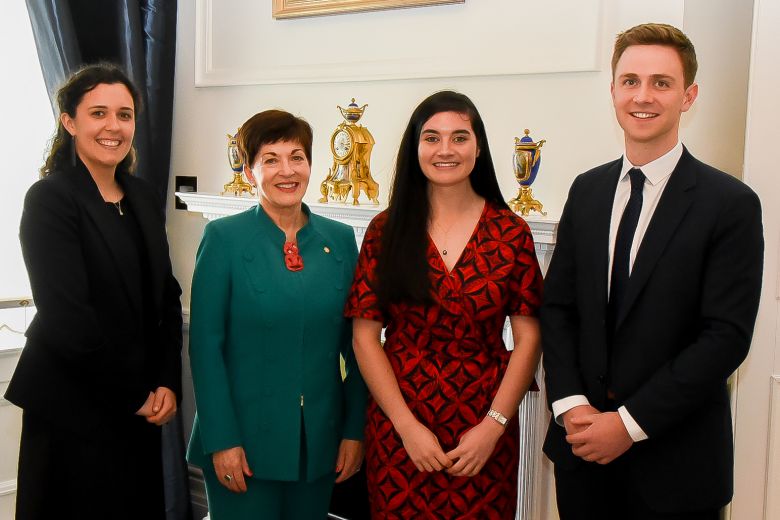 “Congratulations to our three Rhodes Scholars for 2020.  I wish them all the best for their future studies at Oxford,” said the Governor-General Her Excellency The Rt Hon Dame Patsy Reddy when announcing the awards. “The standard of all of the finalists was extremely high and their enthusiasm and ability was impressive.  They are all outstanding young New Zealanders.”

Described by one of her referees as “one of the most exceptional students I have had the privilege to work with”, Isabella Lenihan-Ikin is currently at Victoria University of Wellington where she has completed a BSc (Hons), majoring in Cell and Molecular Bioscience in her undergraduate degree and Geography in her Honour’s degree.

“At Oxford, I hope to continue my research exploring the nexus between human health and climate change, through completing two Masters of Science; one in International Health and Tropical Medicine, followed by Refugee and Forced Migration Studies,” says Isabella.

Her strong sense of social justice and passion for the environment was developed from an early age, with a commitment to making a difference in her community from her first day at high school, where she created and led a dedicated Waste Wise Team—including peers, teachers, experts and lecturers from Auckland University—to develop and implement a waste system at Western Springs College, where she was Dux in 2014.

Isabella is also Vice President of the VUW Feminist Law Society, a volunteer adviser with the NZ Union of Students’ Associations and currently serves as a Student Consultant in the Ako in Action programme, which partners students and academics to collaborate on teaching and learning design.

Her academic success and political and environmental activism are matched by her sporting enthusiasm. Isabella has played soccer since high school, and continues to play in the women’s Premier League.

“I struggle to answer the question of what I want to be,” says Isabella. “However, I know who I want to be. Someone who remains vocal in times of injustice and—as we face social, political, racial, environmental and economic issues—someone who continues to seize the light and opportunities that emerge: the hope in times of adversity.”

KDee Aimiti Ma’ia’i is proud to be the first Pacific woman to be awarded a Rhodes scholarship, and is looking forward to studying for her DPhil in International Development at Oxford. Currently completing a BA Hons majoring in Pacific Studies at the University of Auckland, KDee Aimiti has followed a remarkable path into academic life.

“My own path has not been straightforward and success for me has been hard-won, but I am proud to be in a position to give back to the institutions, people and region that brought me up,” she says.

KDee Aimiti faced early challenges and left school at age 16 to provide financial security for her family. After working for two and a half years, she continued to dream of further education. After completing UA’s New Start programme, she started her BA in mid-2016, completing her degree in only two and a half years.

Over the past four years, while achieving remarkable academic results herself, KDee Aimiti has devoted considerable time and energy to helping others do the same. She has worked through Pillars, a charitable organisation that partners children whose parents are incarcerated with community mentors, working with a 15-year-old girl from Papakura who had not attended school for some years. “I enrolled her in Te Kura Correspondence School and she has since caught up on the 2.5 years of missed content and is now working at a year above her age group and has plans to re-join mainstream school for her final year of high school,” says KDee Aimiti.

The work with Pillars has extended to include creating and proposing an academic programme for all the mentees, aimed at forming a supportive community conducive to learning to help over 80 students achieve the highest possible qualifications at NCEA level.

While at university, she has continued similar work with Māori and Pacific students, acting as a Tuākana mentor, a graduate teaching assistant and a New Start student support facilitator. Along with many other academic and course awards, KDee Aimiti holds one of the inaugural John McCall Macbain Kupe Leadership Scholarships

“KDee has thrown her heart and soul into supporting young people who have experienced the challenges she has known firsthand,” says one of her referees. “Education was for her empowering and liberating, and was her own path towards unlocking her potential.”

KDee Aimiti is very aware of the irony involved in studying International Development, with a focus on the Pacific, from the Development Studies department—previously known as Colonial Studies—from which Pacific imperialism was developed. “I have always been and will always be of the Pacific,” she says. “I aim to be its deafening whisper; championing the causes of Pacific geographies and people in non-Pacific spaces so as to further our collective Pacific cause.”

Oliver Pooke graduated with a BSc (Hons) in Chemistry in 2017 from the University of Otago and has been working as an Associate for The Boston Consulting Group in Sydney since then. He plans to study for a Master of Public Policy and an MSc in Evidence-based Social Intervention and Policy Evaluation at Oxford.

“I am in no doubt that evidence-based policy making holds enormous potential as a tool for creating more effective policy, something particularly important in the current political climate of rising populism, which is resulting in poor policy decisions based on ideology rather than evidence,” he says. “I aspire to work at the interface of policy and research, because I believe New Zealand needs a stronger and more consistent approach to the use of academic evidence in policy-making across government.”

As well as academic excellence through his school and university career, Oliver has achieved widely in music (completing his ATCL in violin and playing in regional and national youth orchestras), debating and swimming. His community service has incorporated these interests, from working with Ignite Consultants (a student organisation that provides voluntary consulting services to local not-for-profits), serving as a committee member for the Dunedin Youth Orchestra, to his role as an intern on the Board of Trustees of The Healthcare Otago Charitable Trust.

These interests have continued into his working life in Australia, where he has worked on pro-bono projects for organisations in the social and arts sectors, and has coordinated the Sydney BCG office’s relationship with 180 Degrees Consulting, a large student-run organisation which draws on talented university students to provide consulting services to non-profits, improving and developing the next generation of future leaders committed to making a difference.

One of his referees describes him as “a person with great empathy and humility [who] uses these qualities to engage peers and progress development of new ideas. Combining these core attributes, together with his exceptional intellect and his experiences to date, together with the opportunity provided by the Rhodes Scholarship, I would certainly expect to see him being a future leader and driver of positive global change.”

The Rhodes Scholarship provides transformative opportunities for exceptional all-round students to carry out postgraduate study at the University of Oxford. Today, 95 scholars are selected from 64 countries and go on to become part of the wider Rhodes scholarship community while at university and throughout their lives.

Sir Cecil Rhodes had a keen understanding of the importance of tertiary education.  His vision in founding the Scholarship was to develop outstanding leaders who would be motivated to “fight the world's fight”, “esteem the performance of public duties as their highest aim” and promote international understanding and peace.

Today the Rhodes Scholarships for New Zealand is a partnership between the Rhodes Trust and the Robertson Foundation, with the application and selection process managed by Universities New Zealand along with about 35 other scholarships worth over $2 million.