The national Level 4 COVID-19 lockdown in March and April and Auckland’s repeated Level 3 lockdown had major repercussions on the way New Zealanders work.

New Zealand is now in uncharted territory, according to Professor Alan Bollard, Te Herenga Waka - Victoria University of Wellington’s Chair for Pacific Region Business in the School of Government. 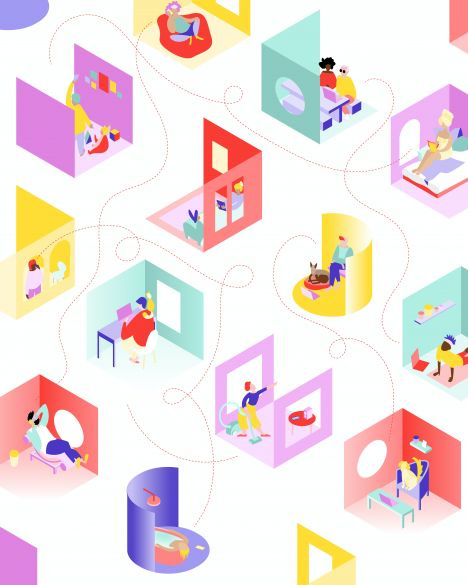 “We have never been through this sort of event before, so we don’t know how bad the jobs damage is going to be. We also don’t know which sectors will be hit longer term.”

The COVID shock means working from home has suddenly become a way of life for many thousands.

For those who enjoyed the experience of home working, going back into the office has never looked less appealing. For others, perhaps those unable to concentrate or find a quiet corner at home, or those missing the support and cameraderie of work colleagues, it was something to be endured for as short a time as possible.

The empty offices, shops, cafes, buses, trains, and deserted city centres became a nightmare for those whose livelihoods depend on a constant stream of workers.

The lockdowns came at huge economic and social cost to New Zealand, with government support packages needed to insulate many in the workforce from unemployment or lost income.

Professor Bollard says there has been “effective and fast cushioning” through the Government’s jobs subsidy, now extended three times.

“This means the unemployment data so far does not look too bad, but we know that will worsen as the subsidies terminate, which is inevitable as they are costing so much. It’s going to be a big political challenge to move to longer term arrangements that are better targeted.

“Those in marginalised/low-skill/low-wage/casual jobs are most at risk. Some of those jobs have already gone, and others will be displaced. That particularly impacts Māori, Pasifika, younger workers, and some migrant groups.

“We should look for policy to support the good parts of the gig economy, and also positive ways to incentivise those unemployed to where there is still strong demand, especially in the primary sector. The construction sector has already had ‘shovel-ready’ project support from the Government – but the problem there is getting projects through the thicket of expensive planning approvals in time.”

“One of the features of this COVID shock is that some of the data is quite confusing.

“We had a huge reduction in GDP of 12.2% in the second quarter. Despite this, the unemployment rate did not move that much in the quarter – this is because of the jobseeker support schemes, which are now terminating but have not yet reflected in the employment numbers.

“However, looking behind the employment data, we see that the participation rate fell from 70.7% to 69.7%, much of which was women’s employment.

“In addition, the hours worked fell 10%, and the Statistics NZ Underutilisation Rate increased 15% compared with the previous quarter.”

There will also inevitably be an increase in business start-ups.

“These are risky and many will fail. But local incubators and support agencies can do a lot to improve survivability and growth.

“New Zealand returnees with savings and skills will spawn some interesting propositions, but of course this will all take some time to eventuate.

“In terms of how well the tertiary education sector will weather the storm, we have encouragingly already seen an increase in domestic enrolments by students who have lost jobs, or fear losing jobs.

“But there is a need for students, workplaces and institutions to recognise the different skills required in future to ensure a modern and flexible workforce, particularly the importance of boosted IT proficiency.”

The Director of the New Zealand Work Research Institute and a commissioner of the New Zealand Productivity Commission, AUT Professor of Economics Gail Pacheco, says it is hard to judge what the full effects of “substantial supply and demand shocks” on the workplace will be.

“While some industries have taken the immediate hit – such as the tourism and hospitality sectors - the effect of a downturn in consumer spending is likely to permeate through much of the whole economy.

“Importantly, our recovery from this recession will rely on us being more open to new technology.

“As emphasised in our recent inquiry into the ‘Future of Work’ (https://www.productivity.govt.nz/inquiries/technology-and-the-future-of-...), New Zealand should embrace technology and take steps to encourage more adoption, diffusion and innovation.

The report concluded that technology doesn’t merely replace jobs but it also creates them. Forecasts that technology will replace work are “simplistic and out-of-step with historical experience”.

It also recommended New Zealand firms take up technology more quickly than in recent years but said there were some hurdles in the ability to do so.

“Our policy settings generally encourage openness to ideas, goods, services, investment and skills. And our labour market has historically done a good job of creating lots of jobs.

“On the other hand, core skill levels in our schools are dropping, high house prices make it hard for some workers to move to better jobs, and New Zealand’s business environment lacks dynamism.”

Te Herenga Waka – Victoria University of Wellington School of Economics and Finance senior lecturer Dr Luke Chu agrees the implications of COVID-19 on work and education are far from obvious yet.

“It is unclear whether COVID is only a temporary shock or if it will have any long-term impacts, say beyond three years. However, my guess is that COVID will accelerate the process of de-globalisation that has become more and more a trend, as seen with the rise in  inequality, Brexit, and international trade wars.

“Relatively speaking, tradespeople’s jobs mostly depend on the size of the local economy and its population. So if de-globalisation continues, with more restrictive immigration policy, both the economy and population growth are likely to slow down quite a bit. That indeed could be a long-term trend for tradespeople.

“The future for university degrees is more of a mixed bag depending on the field. But generally speaking, university training is less specialised with more job flexibility, given we teach people how to think, which could be an advantage in a post-COVID world full of uncertainty.”

University of Otago Department of Economics senior lecturer Dr Murat Ungor sees some opportunities from COVID-19 for the economies of New Zealand cities.

“Take Dunedin, which is a service-sector economy. The University of Otago and Dunedin Hospital are the two major income-generating organisations, in addition to tourism. There are also many small-scale service-sector establishments, such as cafes, restaurants, bars, pubs, hair salons, barbers, hotels, motels, etc.

“During the lockdown period they had to shut down their businesses for a while. For some of them, this situation was not sustainable and they left the sector.

“It is unlikely any manufacturing plants and factories will be opened in Dunedin in the medium-term, and international tourism and event-hosting businesses have been hurt. So it is now time for Dunedin to think creatively and to position itself as a city of e-commerce, e-sports and e-tourism.”

The Digital Partnership Agreement signed with Chile and Singapore in June was a timely response to COVID-19, he says.

“It is obvious that the digital economy, especially artificial intelligence (AI) and robots, are always going to be in the news and form an important part of the future for the entire planet. This agreement acknowledges the importance of adopting digital technologies to support international trade.”

He says it is likely more support will be needed for Auckland and the whole country as time passes, especially for the most economically vulnerable.

“It shows us the importance of education in developing New Zealanders who have the flexibility of mind and skills to work across the traditional professions.”

A recent UNZ paper analysing the 2018 Census (https://www.universitiesnz.ac.nz/latest-news-and-publications/degrees-change) shows a continuation of the long-term trend of the population becoming increasingly well qualified.

About 38% of young people start university within a few years of leaving school.

“That percentage will continue to climb as younger qualified people enter the workforce and older, less qualified, workers retire.”