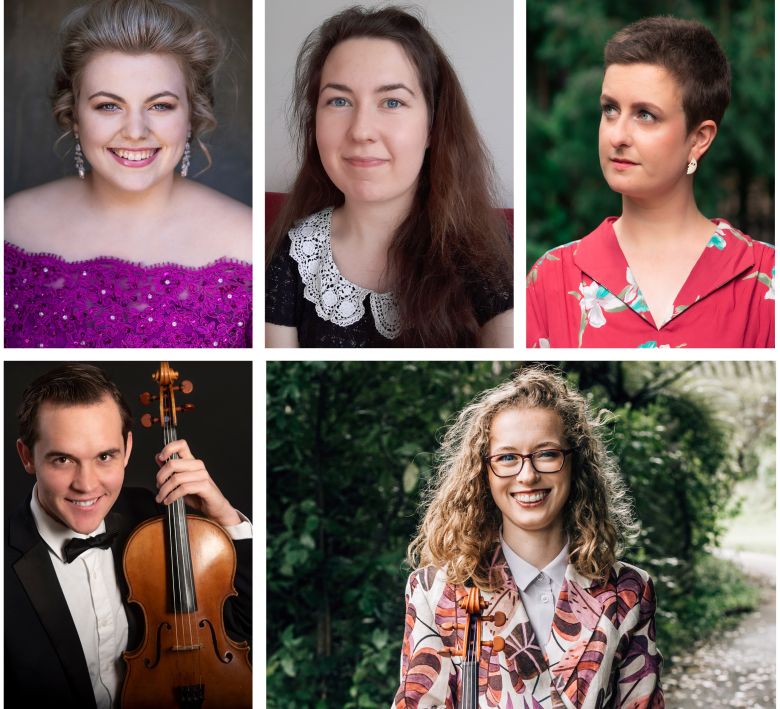 Five exceptional young classical musicians have been awarded a 2022 Kiwi Music Scholarship to help them pursue their bright futures on the world’s stages.

The annual Kiwi Music Scholarship is funded though the Kiwi Music Trust to recognise emerging classical musicians’ consistent hard work and talent and support their future development whether overseas or in New Zealand.

Bethany Angus, aged 24, is studying for a Master in Historical Performance Cello at the Royal Conservatoire The Hague in the Netherlands.

Bethany chose the Royal Conservatoire because it is one of the top institutions in the world to further her passion for early music. She intends to bring her learning back to New Zealand where she hopes to contribute to the popularity and knowledge of historical performance music.

Bethany is also an accomplished keyboardist and has played as a casual harpsichordist with the New Zealand Symphony Orchestra, as well as with various choirs, secondary schools and violin–piano duo Duo 440.

Recent cello performances include at the Adam Chamber Music Festival with the Troubadour String Quartet, Brahms' Septet in B flat with the Amici Ensemble and around the Wellington region with cello–piano duo Duo à la Salon.

Gracie Francis, aged 30, is one of the most sought-after collaborative pianists at The Juilliard School in New York, a significant achievement in a competitive pool of top-rank pianists. Her talents have also been recognised outside the school by leading figures such as soprano Renée Fleming and the heads of the Metropolitan Opera and San Francisco Opera music staffs.

“The first year of my doctorate was intense,” says Gracie. “I've felt excited to re-enter the world of academic scholarship and have had wonderful performance opportunities too. I'm so fortunate to be in a programme that encourages both facets of my artistry.”

Julliard collaborative piano teacher Jonathan Feldman says Gracie “is, and will continue to be, an important asset to the future of the New Zealand artistic community. We are thrilled that she is a part of ours.”

Georgia Steel, aged 28, will be studying for a Master of Music in Music Performance specialising in the viola at the Royal Welsh College of Music and Drama in the United Kingdom.

Between graduating from Victoria University of Wellington in 2017 and starting her master’s, Georgia has continued learning from viola teachers at the New Zealand School of Music and since 2020 online from Nancy Johnson, her upcoming teacher at the Royal Welsh College.

Georgia was originally due to begin her master’s in 2020 but had to delay because of the pandemic.

The Royal Welsh College has recently started a youth programme for disabled musicians in partnership with the UK’s National Open Youth Orchestra. As a disabled musician herself, Georgia looks forward to supporting the programme with her wealth of experience in music education and disability activism.

Felicity Tomkins, aged 26, will use her scholarship to support her final year of studies towards an Artist Diploma in Opera Vocal Performance at the University of Cincinnati College–Conservatory of Music (CCM) in the United States.

A highlight of Felicity’s CCM studies has been performing as Jeannette in a 1960s-set version of French composer Joseph Bologne Chevalier de Saint-Georges’s eighteenth-century opera L’Amant Anonyme, which she says was “a wonderful and rewarding experience”, adding: “I had a very ‘proud Kiwi' moment seeing my hometown of Te Puke listed in the digital programme!”

Other CCM highlights include being the soprano soloist in Mahler’s Fourth Symphony with the CCM Chamber Orchestra and taking part in an American Art Song Masterclass with pianist John Musto and soprano Amy Burton.

“I am thrilled to have further developed my artistry since arriving at CCM and cannot wait to see how this continues to be strengthened over the remainder of my time on the Artist Diploma programme and beyond,” says Felicity.

Zephyr Wills, aged 23, will be studying for a Master of Music at Penn State University in the US, where he will be artistic assistant to violist Professor Timothy Deighton. The role will include leading the Penn State Orchestra viola section and being a substitute undergraduate teacher.

Zephyr has a Bachelor of Music with First-Class Honours in Viola Performance from the New Zealand School of Music – Te Kōkī at Te Herenga Waka – Victoria University of Wellington.

He adds his Kiwi Music Scholarship to an impressive 17 other awards and scholarships.

Zephyr took part in the prestigious Adam Summer School for Chamber Music in Nelson from 2018 to 2021. Performing in an array of showcases, festivals and orchestras, including the New Zealand Symphony Orchestra, the Auckland Philharmonia Orchestra and Orchestra Wellington, he has appeared alongside numerous respected musicians. At the 2021 Martinborough Music Festival, he was the only student in a group of high-level players such as Wilma Smith and Andrew Joyce.

Commenting on the five recipients of a 2022 Kiwi Music Scholarship, selection committee chair Emeritus Professor Peter Walls says: “We were delighted to see such a talented group of students applying for the scholarships this year. It was good to be able to award scholarships across such a wide range of musical pursuits.”

The Kiwi Music Scholarship was established by Sven Stenbäck in memory of his wife Maida Stenbäck, née Saunders, a New Zealander who loved classical music. Funding for the scholarship is made available through the Kiwi Music Trust.

It is administered by Universities New Zealand – Te Pōkai Tara along with more than 35 other scholarships.

Further details are on the scholarship’s page on the Universities New Zealand website.