Matthew Sutcliffe, from Wellington, has been awarded the prestigious 2019 Girdlers’ Scholarship, which will enable him to study Human, Social and Political Sciences at Corpus Christi College, Cambridge, starting in October 2019. 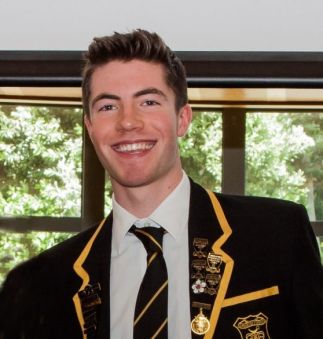 “This programme looks at the big social questions and political issues that confront us today,” says Matthew. “I think the way these are looked at—from anthropological, sociological and political perspectives—is profoundly valuable.

“The HSPS interdisciplinary approach, which combines the analytical reasoning of politics, the human insights of sociology and the historical methodology of anthropology, is something that not only sews these interests of mine together but extends and challenges them too.”

Matthew attended Wellington College, where he was 2018 Dux. He achieved excellence endorsements in five NCEA Level 3 subjects across a wide spectrum of subjects, Scholarship in seven subjects, was a top performer in the Cambridge Mathematics examination, and among the top 1% of both the Australian Mathematics Competitions and the ICAS Science Competition.

During his time at Wellington College, Matthew was actively involved in a wide range of extra-curricular activities, including launching a tutoring programme that connected senior students with juniors to help them progress in their academic success. Outside the school environment, he started a partnership with Wellington City Mission to provide practical help to disadvantaged people in the city.

Debating and public speaking were an important part of school life, with success at national level in both activities as a member of the College’s Premier A Debating Team and winner of the national secondary schools’ United Nations NZ Speech Competition. Matthew also shows considerable sporting prowess, breaking the 1500m record at the regional McEvedy Shield Athletics event and 1st place in the Wellington Regional Cross Country Championship.

Matthew would like to work at the interface of political affairs and social debates, in journalism or policy analysis. “New Zealand will have to confront major issues around migration, refugee movements, climate change, nationalism and religious intolerance,” he says. “Although every country faces these problems in one way or another, we are a small independent maritime country with a unique character and an obligation to respect the Treaty of Waitangi. I look forward to the challenge of working in this milieu.”

Valued at approximately £35,000 (NZ$67,000) per year, the scholarship will pay for Matthew’s university and college fees and contribute to his living costs while studying.

In announcing the decision on behalf of the Company, Past Master Lord Strathalmond says, “The Company is delighted to award Matthew this scholarship, as he embodies the qualities we seek.  He has the academic ability to perform well at Corpus Christi College, and the ambition to take full advantage of this extraordinary opportunity. We will watch his progress with interest and support him during his time at Cambridge.”

Universities New Zealand, formerly the New Zealand Vice-Chancellors’ Committee, administers this scholarship in addition to around 40 other undergraduate and postgraduate scholarships each year.