What happens to international students who remain in New Zealand after getting a degree?

Do most of the international students who remain in New Zealand after completing degrees end up driving taxis or working as cleaners and baristas?

UNZ has looked at linked data from the 2018 Census and the Integrated Data Infrastructure to see whether this popular view is grounded in fact.

Focusing mainly on international students who gain a degree in New Zealand, we tried to answer four questions:

Who are we talking about?

The Census is the only New Zealand dataset that contains all the job titles that people are employed under.

We also focused mainly on people in full-time employment at the time of Census 2018. There are many reasons why graduates might be in part-time work (such as taking time out to raise a family) and this information is not available in the datasets, making it difficult to account for different graduate outcomes.

Who stays after graduation?

Nearly half of all international students leave New Zealand immediately after completing their degrees. Of the remainder, some stay to travel and work for a period before leaving the country, and a smaller proportion remain here long term.

Immigration settings have changed several times over the past decade, but since 2018 any international graduate with a level 7 (bachelor’s) or higher qualification has been automatically eligible for a Post Study Work Visa, allowing them to stay in New Zealand and work for up to three years. They can then apply for another, non-Post Study Work Visa if they wish to remain after that. 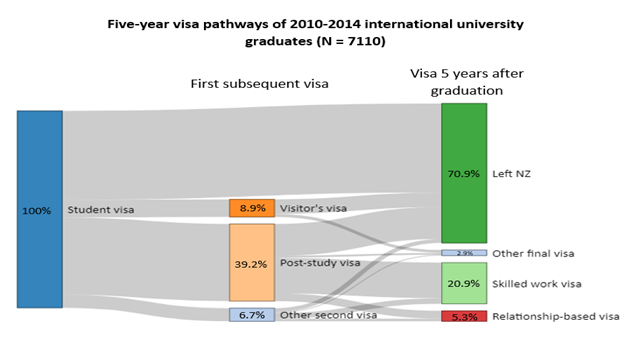 Does working while studying affect the proportions who remain and work after graduating?

Earlier this year, UNZ published analysis that showed that, while 81% of domestic students work while they study, just 37% of international students do the same.[1]

By contrast, of the 3,897 (55%) of graduates who remained and worked in New Zealand after graduation, 81% had been in some sort of paid employment during the final year of their studies.

This suggests that working while studying makes it far more likely that international graduates will remain to work in New Zealand after graduating.

Figure 2 shows all 16,707 degree-qualified international graduates who remained in New Zealand after graduating and who were still here at the time of the 2018 Census. The proportion who worked and did not work is shown on the left with, on the right, those who were in full-time employment, part-time employment or were not in employment, education or training (NEET).

Figure 2: Employment status in the year of degree completion and at the time of Census 2018

Figure 3 below starts to indicate the sort of journey graduates go through after graduation—where a proportion initially try to get work wherever they can and then, over the ensuing 2-3 years, work themselves into jobs more appropriate to their qualification and skills.

Figure 3 shows in which sectors domestic and international degree-qualified graduates were working in the first year after graduating and which sectors they were in at the time of Census 2018. These are people who graduated between 2008 and 2016—so between two and ten years between entering the workforce and Census 2018.

You can see that, for example, 20% of all international graduates started their employment in the accommodation and food services sector, but only 7% were still in that sector by Census 2018.

Figure 3: Employment industries in the degree completion year and at the time of Census 2018 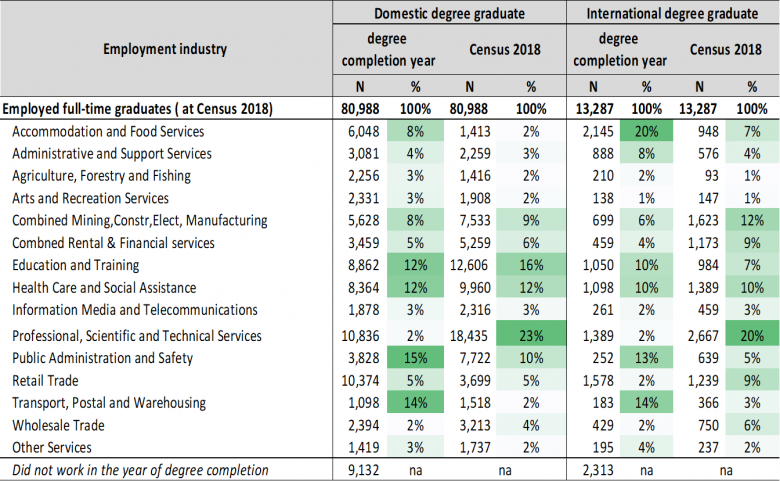 Movements between industries are complex, with graduates transitioning between (almost) every pair of industries during and after study. To illustrate the transfers, we chose the largest industries during and post study. Figure 4 demonstrates flows from Accommodation and Food Services (where 20% of international graduates were employed as students) and Figure 5 shows flows into Professional, Scientific and Technical Services (where 20 % of international graduates were employed post study). In each case, the largest subgroup does not move, but approximately three quarters of individuals move to or from a different industry.

Figure 4: Industries of employment for international degree graduates who worked in Accommodations and Food Service industries as students (N=2,145) 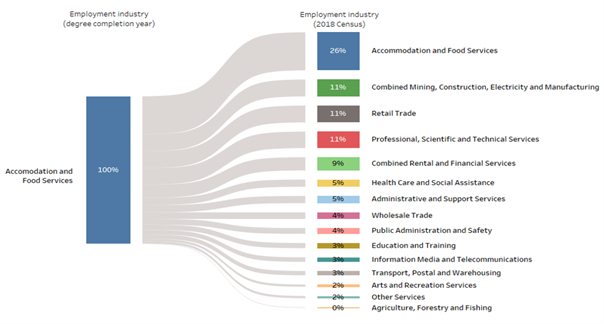 Figure 5: International degree graduates working in Professional, Scientific and Technical Services industry and their industries of employment as students (N=2,667) 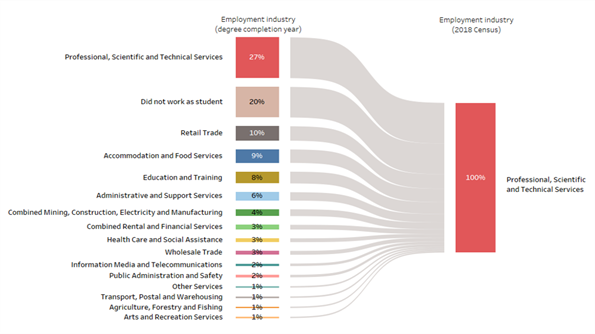 Notes for Figure 4 and 5: Percentages are calculated on rounded counts and we combined some industries for this analysis. Population is restricted to full-time employed at the time of Census 2018. Source: Universities New Zealand, extracted from Integrated Data Infrastructure (IDI).

What do international graduates end up employed as?

For one degree-qualified international student whose job title suggests they could be under-employed there are nearly 10 other degree-qualified international students who have job titles that fall under ANZSCO skill level 1, suggesting they are degree-level skilled employment. The ten most common job titles for these people are presented in Figure 8 (most common to less common).

We used linked data from the 2018 Census and the Integrated Data Infrastructure to look at post-study outcomes for international students who gain a degree-level qualification and remain working in New Zealand.

We chose these ranges deliberately.

We are presenting a general trend only; results need to be regarded with a degree of caution and variations within the groups are expected.

Census returns can produce errors or misleading results, and linkages between Census and administrative data are not 100% correct. People completing the census provide a job title in a free text field and census forms are then scanned. Optical character recognition and algorithms are used to assign most people to one of the standard ANZSCO job titles. Those who do not clearly fit into a job title are then evaluated by a person who makes a judgement based on the free text title provided. As such, the Census includes people who have been classified as Mechanical Engineers with no post-school education and others under the same title with postgraduate qualifications. Similar patterns are evident for a wide range of other job titles.

The results in this paper are not official statistics. They have been created for research purposes from the Integrated Data Infrastructure (IDI) which is carefully managed by Statistics NZ. For more information about the IDI please visit https://www.stats.govt.nz/integrated-data/. Access to the data used in this study was provided by Statistics NZ under conditions designed to give effect to the security and confidentiality provisions of the Statistics Act 1975. The results presented in this study are the work of the authors, not Statistics NZ or individual data suppliers.